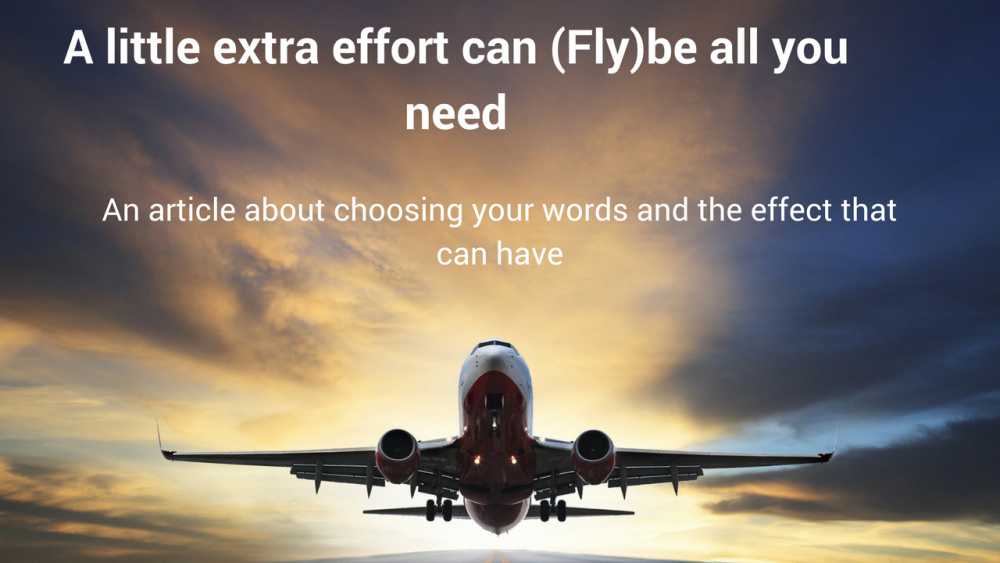 In the last few months I have needed to travel to Southampton Airport every two weeks or so. To get there I use Flybe and during the month of June the airline supports Cancer Research by collecting money on their flights (http://www.flybe.com/corporate/media/charity.htm). It’s a great thing to do and every time I have been on a flight one of the hard-working, very nice attendants makes the announcement encouraging passengers to donate.

It’s usually a statement that you can tell is being read from the page but it encourages some of the people on the flight to actually contribute a few coins to the bag when they subsequently walk up and down the plane collecting.

That’s all well and good as they’ve done their job and they’ve managed to raise some money. Even a job well done some might say but I never found it inspiring enough to dip my hand in my pocket.

I like to give money to charity as I believe we should help others whenever we can and because I do I’m always quite selective when I do give money to causes that I may not have previously considered.

On my last flight home the same announcement was made however there was one difference and it was only a small one. The lady announced that they would running a campaign during the month of June to raise money for Cancer Research but then she went on to say that she was a cancer survivor herself and so this was a cause that was very important to her and close to her heart. This got me thinking about my experiences of healthy lovely people I know who have been affected by this awful affliction and, when I looked around, the same seemed to happen among my fellow passengers.

What do you think happened next? Everybody on that plane contributed something. Before she had even finished her announcement I was checking my pocket for change and it was the same throughout the whole plane. This is a great example of how a little bit of extra effort and some thought to what you say can reap rewards.

Whatever it is that you’re doing whether that be raising money for a charity, working for tips in a restaurant, trying to deliver exceptional customer service, improve a visitor experience or just trying to get more sales, extra little bits of effort in what you say, stopping and thinking for a moment or going that extra mile can often reap great rewards.

It’s a principle that can be used inside work or outside of work personally and professionally. So when you’re out and about today just think to yourself am I getting all the possible benefits from this situation? Am I making all the extra little bits of effort that I need to get the best of everything?

Have a thoughtful day